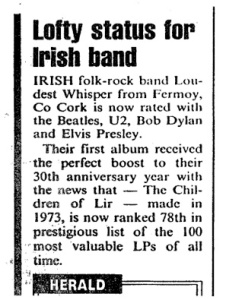 Loudest Whisper are an Irish folk rock/progressive folk group formed in the early 1970s and led by songwriter and guitarist Brian O’Reilly. They are best known for their 1974 debut album, The Children of Lir, a folk opera based on the Irish legend of the same name. The original LP release of the album became one of the most sought after records in Ireland, and ranks among the top 100 rarest records in the world.

In many ways Loudest Whisper could be called the O’Reilly Brothers Band, as Brian and Paud O’Reilly have been the cornerstone on which the Loudest Whisper legacy has been built. Always innovative the O’Reilly brothers demonstrate their creativity whether working on their Operatic scale stage productions like “The Children of Lir” and “Buskin”  or the solid Folk/Rock/blues band we know today as Loudest Whisper.

The band was formed in the sleepy surroundings of Fermoy, County Cork, in the early 1960s as a beat group called the Wizards. The Wizards were not really a folk group, though, with a repertoire largely consisting of Beatles, Rolling Stones and Spencer Davis covers. Like many other underground bands, their music took a heavier turn in the late sixties, when they discovered The Doors, Jimi Hendrix, Cream and the blues.

A new line-up and a new sound led to a new name and Loudest Whisper was born.

By this time, Brian had amassed a considerable repertoire of original songs, taking most of his influences from American folk/rock outfits such as the Mamas and the Papas, Joni Mitchell, the Lovin’ Spoonful and John Sebastian. He’d also developed a strong interest in stage musicals, having appeared in amateur performances of The White Horse Inn and Hello Dolly among others. These influences fused with his increasing interest in Irish folk music and folklore to sow the seeds of an ambitious conceptual work that became The Children of Lir.

The song suite based around the ancient legend of the Irish King Lir and his doomed children, who are fated to live as swans. “The children were allowed to retain human voices because of the beauty of their singing,” explains Brian, “so to me, the legend of Lir was a great story about the power of music, and was crying out to become a musical”.

The quality and scale of the performances far exceeded anyone’s expectations, and word quickly spread well beyond Fermoy. Ireland’s national TV channel RTÉ shot a ten-minute feature (comprising a synopsis of the show and three songs), which was screened on the prime time show Tangents, just after the news. Brian O’ Reilly was now a nationally known name, and The Children of Lir moved on to Limerick and Mullingar.

This exposure assisted Loudest Whisper in securing a record deal with the Irish branch of Polydor.

The Children of Lir has gained an almost mythical status over the years, and is now arguably the most sought-after album ever issued in Ireland.