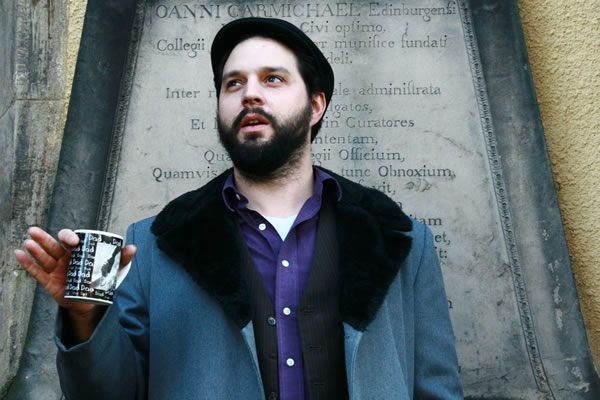 In 1997, Robert Sarazin Blake dropped out of college and hit the road. The folk music of his father’s house had combined with the DIY punk ethos of the day and produced his first batch of songs, Another Irrelevant Year. On the heels of Richard Manning, Billy Bragg, and Ani Difranco, Blake’s 18-year-old release is an early document of the folk-punk movement. On his first US tour, Blake played 30 shows around the US planting seeds as he developed touring, not as an economic model, but as a lifestyle. He hasn’t stopped. Eleven full length albums into his career, he’s continued to write pulling from folk roots, his travels, his contemporaries, and the quiet spot in the back of his mind. The writing has evolved, mellowing with experience and expanding with reference, but the essence of the work has remained the same-strong narratives solidly built on the folk foundation and fully in the immediacy of the now.

The touring and performing has become an art in itself. Performing 200 shows a year, Blake is a world class performer in a neighborhood venue. The show is a combination of songs and rambles landing somewhere between a concert and a theatrical instillation. The neighborhoods have been all over Ireland and the US and occasionally in Canada, Scotland, England, Norway, Denmark, Germany and France. The shows are booked, managed, and driven to by Blake- a one man cottage industry existing underneath and outside the main-streams of the music business.

From his home in Bellingham (WA), Blake started his own record label SameRoomRecords, “recordings of songs and musicians in the same room and the same time” — an oddly unique idea in an era of digitally manipulated sounds — and has sold over 10,000 albums from his suitcase.

This philosophy reflects Blake’s dedication to the moment, to the connection within live performance. There is always a moment in a Blake show where the room pulls together and the space between the singer, the song, and the listener disappears.

“Blake took the stage with a power and intensity that left me feeling that I had just witnessed Jack Kerouac, Ernest Hemingway, and a proton bomb all combined into one.” – Peter Winter, All The Day Sounds

‘At Folk Club Blake channelled the troubadours of old. His wonderful showmanship combined with a musically complex performance to make a great gig for everyone present’ – Jonny Tennant, Folk Club, Whelans, Dublin

“Robert Sarazin Blake is entertainment personified! Oozing wit, charm and songmanship wrapped up in layers of class melodies and lifes observations. Thomas Deakin buzzes his trumpet like a joyous  bee floating in and around Thomas’ tones. A class act. A must hear!” – Joe O’Leary, Levis’ Corner House, Ballydehob

“Robert Sarazin Blake and Thomas Deakin played a set at the Bru Bar & Hostel in Cork City, and absolutely blew  the place away, with a great combination of charming story telling,  and a folk-tinged groovy energy, that simultaneously captivated and electrified the crowd. By the end of the night (and from atop the bar!), these two absolutely brought the house down, and we cannot wait for them
to come back and play again… Many thanks lads!” – Michael Cuddihy, Bru Bar

“Robert Sarazin  Blake and co went down a storm here at Sweeney’s bar. Great music and engagement with a delighted audience, we’ll be sure to host them again sometime. Don’t miss him if you get the opportunity.” – Jenny Guerin, Sweeney’s Bar, Dublin